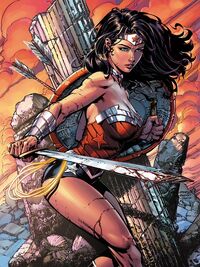 Wonder Woman is an Amazon warrior princess and one of the most powerful superheroes in the DC Universe. The daughter of Hippolyta, she was given power by the Gods to fight against evil in all its forms. Although she was raised entirely by women on the island of Themyscira, she was sent as an ambassador to the world of man, spreading their idealistic message of strength and love. Wonder Woman fights crime and acts as a positive role model for women everywhere. Her equipment includes the Lasso of Truth, magic gauntlets, and an invisible jet. In the secret identity she has adopted to become closer to humanity, she is Diana Prince, a government agent for the Department of Metahuman Affairs. Wonder Woman is also a founding member of the Justice League of America.[1]