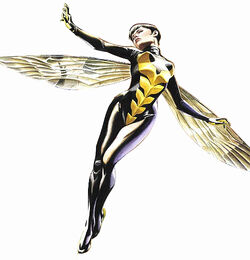 This character is from The Avengers franchise.

Janet van Dyne (Wasp) was the daughter of world-renowned scientist Vernon van Dyne. When an alien brought to Earth during one of her father's experiments murdered the elder van Dyne, Janet contacted his colleague, Dr. Henry Pym. She told Pym of her resolve to bring her father's killer to justice. Pym revealed his secret identity as Ant-Man and Janet underwent a biochemical process involving his Pym Particles that allowed her to shrink to insectoid proportions and grow wings. Furthermore, Pym outfitted her with wrist devices which allowed her to discharge blasts she called her "wasp's stings".[1]