Tasha (Oh Go-eun) started cosplaying since 1999. She is the current Team leader of Spiral Cats. It started as a hobby for her and now it has become her job.

She was first was introduced to Japanese culture through manga and anime. When she was young, her parents took her to a cosplay event and looking around, she felt that it was something she wanted to do. So, she tried her hand at it and started doing it as a hobby for years and eventually formed Spiral Cats.[1] 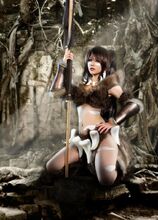 Witch Doctor (Diablo)
Add a photo to this gallery

Retrieved from "https://cosplay.fandom.com/wiki/Tasha?oldid=12174"
Community content is available under CC-BY-SA unless otherwise noted.