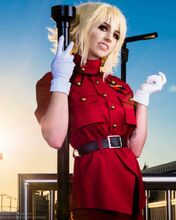 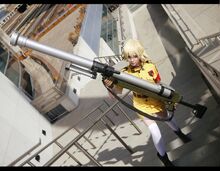 TraumaticCandy
Add a photo to this gallery 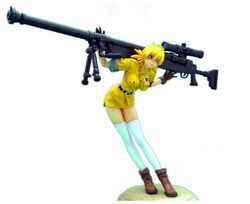 Seras Victoria is one of the main protagonists in the Hellsing series created by Kouta Hirano. Seras was turned into a vampire by Alucard to save her from a would-be fatal gunshot wound in the chest that he also caused.

Seras is a strong willed woman, and apparently had always been since childhood which is confirmed through her flashbacks. Seras is often considered a tomboy; a very brave, strong and heroic young woman who is not afraid to question the orders of her master if they cross with her personal beliefs. Her devotion to morals and integrity is rather unusual, considering her horrid past. However, she is a loyal and trustworthy soldier who will diligently follow the orders of her commander, provided said commander has proven his or her worth.[1]

Retrieved from "https://cosplay.fandom.com/wiki/Seras_Victoria?oldid=10385"
Community content is available under CC-BY-SA unless otherwise noted.