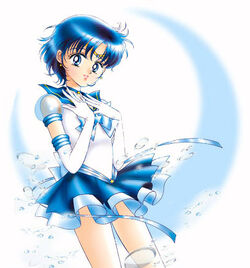 This character is from Sailor Moon.

Sailor Mercury is the first member of the Sailor Team to be discovered by Usagi Tsukino, third to be awakened by the Moon Cats, and serves as the "brains" of the group. Her powers are associated with phases of water and ice, and she can use her mini-computer to quickly analyze a foe in battle. Most of her powers are strategic rather than offensive, and she possesses various pieces of computerized equipment to help her study the enemy. She also has an IQ of 300.

As Sailor Mercury, she wore the standard Senshi fuku without sleeves and the dominant color of the fuku was blue while the accent color was light blue. Her earrings, the gem on her tiara, choker, collar, the center of her front bow, skirt, the elbow fittings on her gloves, and her boots were blue, and her front bow and back bow were light blue. Her collar had three stripes, her earrings were three blue studs, and her boots were similar to Sailor Moon's, except were blue and did not have a symbol on them.[1]