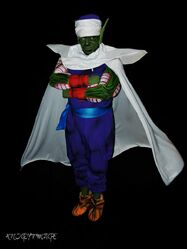 This character is from the Dragon Ball series.

Piccolo was born to avenge his parent's death at the hands of Goku. After his narrow defeat against Goku, Piccolo is soon forced to form an, at first, uneasy alliance with Goku and his friends against newer, more dangerous threats. Thus, he and Goku kick off the formation of the Z Fighters. Out of necessity, he also takes it upon himself to train Goku's young son Gohan, forming a powerful bond which ultimately redeems him when he sacrifices himself to save the child's life from Nappa. After his resurrection, he fully joins Goku and the others in their struggles against ever more powerful villains on Namek and Earth. As the story progresses, his role shifts from warrior to mentor.

Piccolo is one of the most intelligent characters in the series, retaining King Piccolo's tactical genius, and later gaining Kami's great wisdom after fusing with the old Guardian.[1]