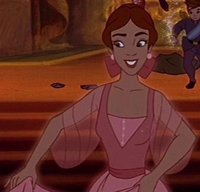 Grand Duchess Olga Nikolaevna Romanov (also known as simply Olga) is the oldest of Anastasia’s three elder from the 1997 Don Bluth film Anastasia. She was the eldest child of the last Tsar of the Russian Empire, Emperor Nicholas II, and of Empress Alexandra of Russia. During her lifetime, Olga's future marriage was the subject of great speculation within Russia. Matches were rumored with Grand Duke Dmitri Pavlovich of Russia, Crown Prince Carol of Romania, Edward, Prince of Wales, eldest son of Britain's George V, and with Crown Prince Alexander of Serbia. Olga herself wanted to marry a Russian and remain in her home country. During World War I, she nursed wounded soldiers in a military hospital until her own nerves gave out and, thereafter, oversaw administrative duties at the hospital. Olga's murder following the Russian Revolution of 1917 resulted in her canonization as a passion bearer by the Russian Orthodox Church. In the 1990s, her remains were identified through DNA testing and were buried in a funeral ceremony at Peter and Paul Cathedral in St. Petersburg along with those of her parents and two of her sisters.