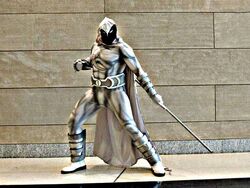 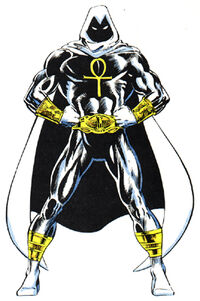 While working for the African mercenary Raoul Bushman in Egypt, Marc Spector and his group stumbles upon an archaeological dig whose crew includes Dr. Peter Alraune and his daughter Marlene. The dig had uncovered an ancient temple where artifacts included a statue of the Egyptian moon god Khonshu. Intent on looting the dig, Bushman kills Dr. Alraune. In response to Alraune's murder, Spector challenges Bushman to personal combat but is beaten nearly to death and left to die in the sub-zero temperatures of the desert night.

Roaming Egyptians who worship the ancient Egyptian gods find Spector and carry him to their temple. Helpless before the statue of Khonshu, Spector's heart stops. Khonshu appears to him in a vision, offering Spector a second chance at life if he becomes the god's avatar on Earth. Spector awakens, wraps himself with the silver shroud that covers Khonshu's statue, and again confronts Bushman. He defeats Bushman and returns to America with Marlene Alraune, Frenchie, and the statue of Khonshu. Deciding to become a crimefighter, Spector creates a silver cloaked costume, based on the silver shroud, and becomes the Moon Knight.[1]