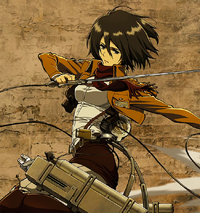 Mikasa Ackerman is the adoptive sister of Eren Yeager, and the main female protagonist of Attack on Titan

Mikasa is a fairly tall, physically fit and very muscular teenage girl with chin-length black hair. She is of Asian heritage, with pale skin and calm, black eyes. In the anime, however, her eye color is not consistent and often varies, depending on the light and surroundings, between shades of gray and occasionally blue. Her body has been depicted as extremely well-toned, with little, if any, in the way of body fat and muscles lined throughout her arms, legs, and abs. Mikasa also has a small scar below her right eye.

As a soldier, Mikasa is often seen wearing the uniform consisting of a short, light-brown jacket with the badge of the Survey Corps on both shoulders, on the front left pocket, and on the center of the back, a white shirt, a black sash around the waist covering the hips, white pants and black knee-high leather boots. In the anime, the sash and boots are dark brown. She is also seen wearing a green cape with the symbol of the Survey Corps after entering the faction. A unique part of her attire is a black (dark red in the anime) scarf, which was given to her by Eren after saving her from human traffickers.[1]