Kamui (or Kamui Cosplay) is technically a two-person team based out of Germany. They started making costumes in 2003 and never stopped ever since. They also play a lot of video-games and really love to watch movies.

In 2003 Svetlana, used to read magazines about anime and manga. In one of these magazines there was also a report about cosplay events. She decided that she wanted to visit one of these events herself and found out that at least 80% of the attendees were in costume. Next time she had to go in costume as well so picked up a character from a series she really liked which was the Great Saiyaman from Dragonball Z.

After that initial experience she started playing World of Warcraft and got really addicted to the game. She then had a crazy idea to cosplay her avatar which was the first character she created in the game – a night elf druid called Kamui. Since then she made many many more druid costumes and cosplayed her for over 6 years. She also asked her husband, Benni, to help her out with her costumes.[1] 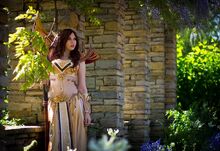