Jessica Nigri is an American cosplay celebrity, promotional model, and fan convention interview correspondent. She has been cosplaying since 2009 and modeling since 2012, having served as an official spokesmodel for several video games and comic book series, including Lollipop Chainsaw and Assassin's Creed IV: Black Flag.

Jessica Nigri was born in in Reno, Nevada, United States, and grew up in New Zealand, where her mother hailed from. She later moved to Arizona. Nigri has been cosplaying since 2009, when her cosplay of "Sexy Pikachu" she wore to San Diego Comic-Con International went viral on the Internet. In 2011, she promoted Gears of War 3 for Microsoft and GameStop, dressed up as the game's character Anya Stroud for the game's release.[1] 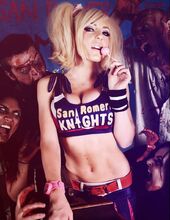 Umbreon
Add a photo to this gallery

Retrieved from "https://cosplay.fandom.com/wiki/Jessica_Nigri?oldid=13315"
Community content is available under CC-BY-SA unless otherwise noted.