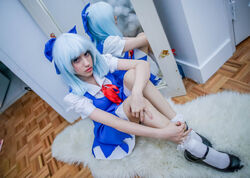 Cirno is an ice fairy who first appeared on the second stage of Embodiment of Scarlet Devil. As a fairy, she is exceptionally strong for her kind, matching the power of some weak youkai. However, compared to most of Gensokyo's residents, she's quite weak. Her personality is childish and she is sometimes considered idiotic by other characters. She stars as the main protagonist of Fairy Wars, and one of several protagonists in Touhou Hisoutensoku and Hidden Star in Four Seasons.[1]