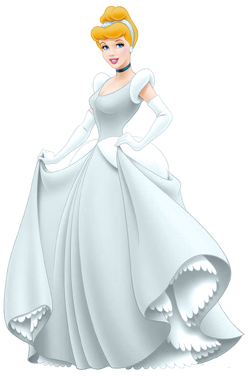 Cinderella is the protagonist of Disney's 1950 animated feature film of the same name and its two sequels.

Cinderella is a young woman with classically beautiful features. She is of average height, well-proportioned and slender with a softly-shaped kind face. She has a curvy and hourglass figure. Her skin is fair and flawless, her lips are pink, and her eyes a twinkling blue. Cinderella's hair is a beautiful strawberry-blonde (light strawberry-blonde in her childhood) and medium-length with soft bangs.

In most of her appearances, she was seen in a maid's outfit which consisted of a dark brown bodice with aquamarine long sleeves, and a brown, knee-length skirt. Her hair was softly tied back into a low ponytail with an aqua ribbon. She also wore a white apron and a pair of black ballet flats. On her occasional tasks, she wore a white apron and a scarf in her hair.

Her second dress and most commonly seen Princess outfit, is a sparkling silvery-blue ball gown with a low-cut neckline and lighter peplum, cap sleeves, opera gloves and a delicate-laced petticoat underneath, and her glass slippers are topped with sparkly hearts. (It should be noted, though, that the ball gown is often colored light powder-blue in merchandise and later productions, and was even recolored as such in the original film's DVD and Blu-ray releases.) Her hair is pulled up into a variation of a French twist that is complimented with a light silver band over it. She wears a simple black choker around her neck and long evening gloves cover most of her arms.[1]