The Cosplay Wiki
Register
Don't have an account?
Sign In
Advertisement
in: Comic Books, Avengers, Disney cosplay,
and 2 more 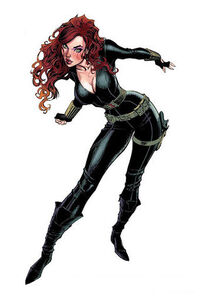 There are varying accounts of Romanova's early life. One account states that Nazis set the building Natasha was living in on fire in Stalingrad, and her mother threw her out the window to a Russian soldier before dying in the fire. The soldier's name was Ivan Petrovitch, and he watched over Natasha for her entire life, remaining by her side as her chauffeur.

Another account suggests Petrovitch had taken her to Department X, with other 28 young female orphans, where she is trained in combat and espionage at the covert "Red Room" facility. There, she is bio-technologically and psycho-technologically enhanced; an accounting that provides a rationale for her unusually long and youthful lifespan.

Much later, Natasha was told that her husband died in an experimental rocket crash, and was drafted into the KGB. She became their best operative from being trained in the infamous Red Room Academy, becoming excellent at fighting and information gathering. During this time she had some training under the Winter Soldier. It was there she was first dubbed the Black Widow.[1]