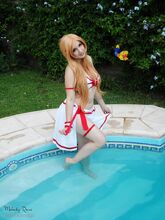 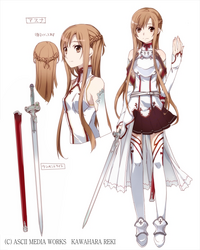 Asuna is a heroine and the partner of Kirito in the Sword Art Online series.

She logged onto SAO after she borrowed her brother's NerveGear. He was one of the people who waited in line for the game's release, but due to a sudden business trip, could not play on the opening day. When she discovered that she and all of the players were trapped in SAO, she secluded herself inside of her rented room in «Starting City» for a week before resolving to take her fate into her own hands. This led her to kill monsters at an incredible rate and level up in a quick fashion, even risking her life in the process. It also earned her the title «The Flash» for performing an astounding «Linear».[1]