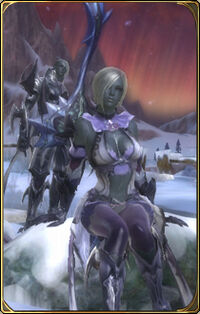 The Asmodian faction is one of the two factions of Daeva that were created as a result of the Cataclysm. They are locked into an eternal blood feud against the Elyos, holding them responsible for the destruction of the Tower of Eternity.

The Asmodians live in the upper half of Atreia, known as Asmodae. Their capital city is Pandaemonium, and they follow the five Shedim Lords, the five Empyrean Lords ordered by Siel and Israphel to protect the upper foundation of the Tower of Eternity. They live in a darker, more dangerous environment than the Elyos and have thus been shaped into having a more demonic appearance.[1]