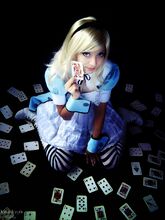 NadiaSK
Add a photo to this gallery 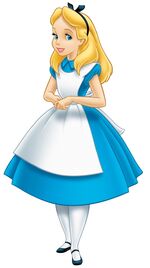 Alice is depicted as a daydreamer first and foremost. Prior to arriving in Wonderland, she sat on the bank of a river listening to her sister reading lessons, which she didn't like, as the book her sister was reading, had no pictures, and claimed, "In my world, the books would be nothing but pictures!" This gives some idea of Alice's large imagination.

And at first, Wonderland seemed like the perfect place for Alice, as it allowed her to indulge in her imaginings as well as her intense curiosity. However, Alice's quick temper and pedantic eagerness to show off her knowledge often proved to be bad qualities in Wonderland, and landed her in many precarious situations. Still she's seen as polite, honest, adventurous, well spoken, lovely and respectful, if not given a reason to be otherwise. She is also very adventurous and curious. She ends up finding that all of Wonderland was only just in her dreams and not real.[1]

Retrieved from "https://cosplay.fandom.com/wiki/Alice?oldid=10808"
Community content is available under CC-BY-SA unless otherwise noted.