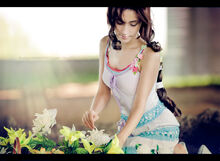 Aerith Gainsborough is the last of the Cetra, an ancient race with powerful magical abilities, and so the Shinra Electric Power Company hunts her throughout her life, seeking to exploit her powers.

Aerith was born to Ifalna and Professor Gast Faremis in Icicle Inn on February 7th, 1985, making her half-human and half-Cetra. When she was barely twenty days old, Professor Hojo tracked Gast down, killed him, and captured Ifalna and Aerith. The two became subject to numerous experiments at the hands of Hojo and Shinra as they researched the Cetra.[1]